You came this way: Home > The Ex with Ken Vandermark > Live at WFMU's Monty Hall… > That's Not A Virus


That's Not A Virus by The Ex with Ken Vandermark 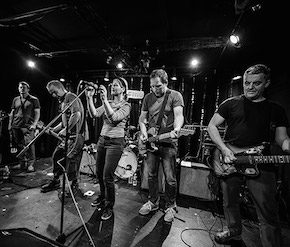 Brian Turner's program put together a night at WFMU's Monty Hall on October 23rd headlined by The Ex (who were joined by Ken Vandermark on sax). Hear Holland's greatest musical exports blow the roof off the joint in front of a full house of attendees, and while it may not be the same as "being there", you will get a pretty good idea of why this band's not-frequent-enough US tours are the stuff of legend.

The Ex are in their 37th year of existence, and listeners may remember they performed one of WFMU's 50th Anniversary shows with a full big band and an assortment of Ethiopian musicians on a colossal Lincoln Center Outdoors bill in 2008.

You can listen to the set on Brian Turner's show page or watch the performance on WFMU's Vimeo channel.

That's Not A Virus by The Ex with Ken Vandermark is licensed under a Creative Commons Attribution-NonCommercial-NoDerivatives 4.0 License.