You came this way: Home > The Axemen > Live at WFMU on Brian Tur… > Church of the Loosely Brethren


Church of the Loosely Brethren by The Axemen 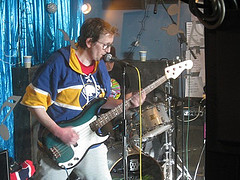 One of the big touring surprises for 2009 has to be the visit of New Zealand's legendary Axemen to U.S. shores. The band began in Christchurch in 1981 and stood somewhat aside of the pop path exhibited by much of the the Flying Nun label roster, but are without doubt one of the more fascinating Kiwi exports. Various live shows and releases displayed a loose but virulent amalgamation of avant-garage, Half Japanese style sax primitivism, confusion, and general air of maladjusted greatness. They've got two reissues "Big Cheap Motel" and "Scary!" out now on Siltbreeze, and are hitting the road coast to coast with Times New Viking. - Brian Turner/WFMU (WFMU Playlist & Streaming Archive for BT's show)

Church of the Loosely Brethren by The Axemen is licensed under a Attribution-Noncommercial-No Derivative Works 3.0 United States License.