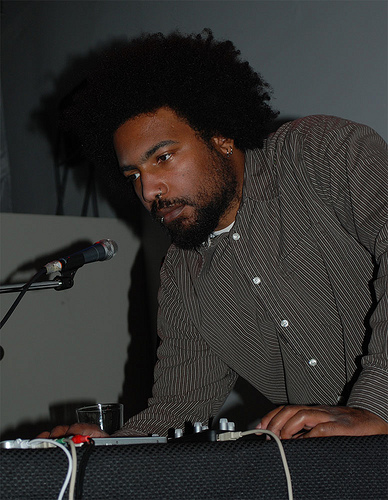 Composer of mercurial soundtracks for uncertain times, Thavius Beck conjoins various strains of electronic music to arrive at a daringly ambitious sound. He joined a lineup of local artists to celebrate black electronic music and benefit KBOO on April 3rd at Holocene in Portland, Oregon.

Mr. Beck has received recognition in The Wire, Spin, and Urb for his solo releases under the moniker Adlib, the Labwaste project with fellow LA artist Subtitle, his recent production for fellow Mush artist K-The-I???, his early work with Global Phlowtations, numerous guest appearances, and producing for and touring in support of and accompanying Saul Williams. An exceptional programmer, engineer and multi-instrumentalist, Thavius Beck’s many talents allow him to take a song from idea to completion without ever having to leave his cluttered studio.