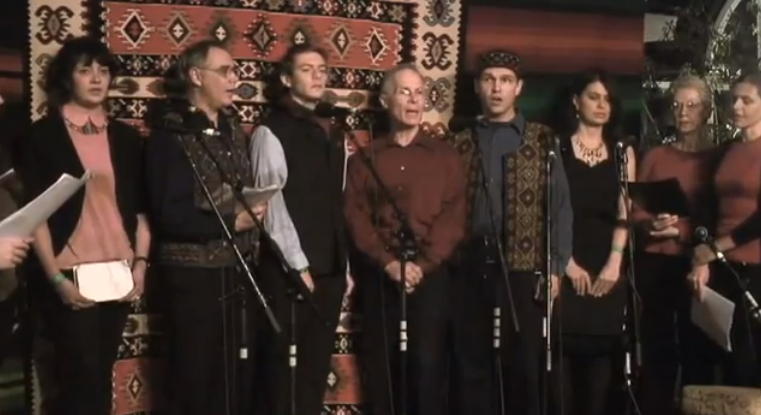 georgian, choral, choir, vocal, chorus, choral music, supruli nyc georgian choir, supruli, See Less...
» LOG IN TO TAG
CURATORS:
COLLECTIONS:
GENRE:
Length:00:17:30
1. Chaghma Chaqrilo Venakho
Carl learned this song from Amiran Turmanidze and his family in the village of Merisi, Achara province. The text refers to the period when the Turks took control of Achara and destroyed the vineyards because Muslims do not drink wine. The Georgians managed to save their vineyards and bring them back to life.
O buried vineyard, where have you gone, and where shall I find you?
Motherland’s vineyard, where have you gone? To what place?
I found you and restored you. I cherish your roots.
2. Ortameheluri
Carl learned this song from Amiran Turmanidze and his family in the village of Merisi, Achara province. The title comes from the place where the song came from: the village of Ortameele (or Ortamehele), which translates as “between two villages.”
We are guests of this fleeting world. We will depart and others will remain.
If we don’t make each other happy, what else will there be for us?
3. Chongurs Simebi Gavubi
The song is credited to 20th century Gurian song master Dimitri Patarava, and the text is a very popular poem by 19th century Georgian poet Akaki Tsereteli. Carl learned this from
song master Karlo Urushadze in the village of Likhauri, Guria province.
I’ll put strings on my chonguri and play it slowly, making them sound beautifully together.
With their melody and voice, they all ring together, each in tune with the others.
If even one of them should snap, you must fix it at once so that the chonguri does not break.
The chonguri is Georgia and we all are the strings – people from all corners.
4. Dideba Maghalta Shina
This sacred hymn comes from the Georgian Orthodox Liturgy of the eastern provinces of Kartli-Kakheti.
Glory to God in the highest, and on earth peace, good will to all.
5. Telauri Chakrulo
This is a table song from Kakheti province that Carl learned from song master Andro Simashvili. This type of singing is one of the few that survives in its original intended context, at the Georgian supra, or ritual banquet, where particular songs are often intended to be sung after certain toasts. Soloists: Carl (opening / middle) Olivia (top).
Be cheerful, O hearth, don't be sad.
A son tells his father, "You've become old. Go away from me."
"Son, what can I tell you?" the old man said,
"Many things have happened to me.
"I have traveled all across the mountains and plains,
"Those uninhabited mountains.
"I have even killed a man in swordfight,
"And never once did I moan.
"O sword of Khevsurian forge,
"In Telavi the Tushetian gave you color [with blood].
"Kind Erekle lifted you
"And blessed you [drew the sign of the cross] for battle."