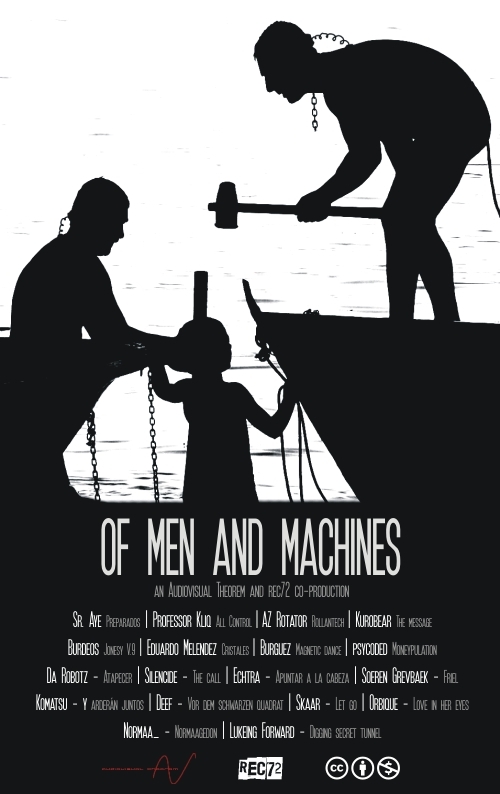 Of Men And Machines is an hommage to the relationship between machines and mankind. This compilation  is considered to be a tribute to the perfect symbiosis men and machines can reach.  Since the appearance of machines, they’ve been closely linked to the concept of progress. Every generation of machines is more perfect and mankind benefits from this evolution. “Of Men And Machines” demonstrates that creativity of human beings is multiplied exponentially with machines – no question.

18 artists from around the globe expound their personal relationship between machines and themselves to produce emotions and sounds. Thus the netlabels Audiovisual Theorem and rec72 employ the same relationship to approach the infinite possibilities and collaborate in a compilation that travels through a variety of music styles. Expect IDM all over the place, dance to Dubstep, chill with Triphop, make yourself comfortable with minimal house and let experimental Electronica run through your headphones.

Of Men And Machines is a netlabel co-copmilation from 2009 by the two netlabels Audiovisual Theorem and rec72 Netlabel. To host those gifted and enthusiastic artists from all over the world. It is an overwhelming collection of innovative music including diverse genres. We are sure that this co-compilation will become a corner stone in Creative Commons music and collaboration, too as it is and was a great challenge to combine the output of so many artists and to melt it into one electronic and organic rock.

Friel by Soeren Grevbaeck is licensed under a Attribution-NonCommercial-NoDerivatives (aka Music Sharing) 3.0 International License.