Rocker's Night Out (Punk for a Day) by Single Bullet Theory 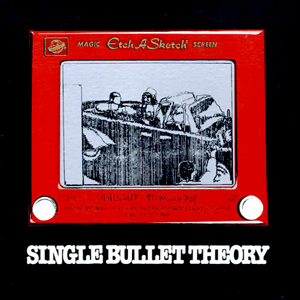 Single Bullet Theory, formed in 1976 by three members from bands who had been in the forefront of the early-70s Richmond original music scene. Frank Daniel, Dennis Madigan and Michael Maurice Garrett (along with soundman Z) had been together since 1971, in the bands Big Naptar (a very loose, experimental, art rock group), which morphed into Crossbreed and, later, X-Breed, who began to garner a larger following, playing a mix of eclectic covers (MC5, Pretty Things, Troggs, V.U., The Move and Terry Reid) and garage-punky original songs.

Single Bullet Theory refined the sound of these earlier bands, while retaining the loose, high energy and high volume (often with three guitars). They were expanding their cred and audience by continuing to play (and often organizing) free warehouse parties, $1-$2 admission bar gigs, and opening for national acts such as The Ramones, The Talking Heads and The Patti Smith Group. In 1981, SBT was signed by Nemporer Records, and the first single, “Keep It Tight”, from their only album, charted at #78.

Lenny Kaye, who edited “Rock Scene” magazine during that period, reviewed the record and dubbed “Rocker’s Night Out (Punk for A Day), ” a “minor masterpiece.”

After three more years of writing, rehearsing and touring, as well as two more self-produced recording sessions and several personnel changes, the band was finally signed by a major label -- but from there the road to success grew bumpier than anyone might have expected.

» VIEW ALL“Rocker's Night Out (Punk for a Day)” Fans

Rocker's Night Out (Punk for a Day) by Single Bullet Theory is licensed under a Attribution-Noncommercial-No Derivative Works 3.0 United States License.