Waterbound by Shake That Little Foot 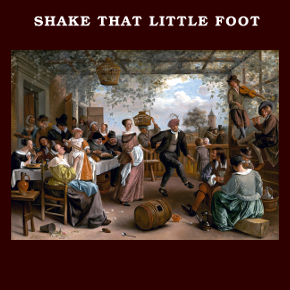 This mostly instrumental album was recorded in Liverpool, England in 1993 by a group who had yet to adopt a name. Eventually, they became Shake That Little Foot. After getting their original tracks from the recording engineer, Mike Cooper, they released this album online.

The band notes that "Sally Ann" is a composite arrangement of three different traditional versions of this tune: a frailing banjo tune (the intro), a fiddle tune (the instrumental break), and a song. Guitarist Chris Erswell also notes:

"Don't miss the comic 'Flopped-Eared Mule'. There is also a rollicking rendition of 'Bill Cheathum' which will be sure to get your feet a-dancing. Oh, and there is a banjo version of 'Scotland the Brave' to a back beat like you've never heared it before."

Waterbound by Shake That Little Foot is licensed under a Attribution-NonCommercial-ShareAlike 3.0 International License.