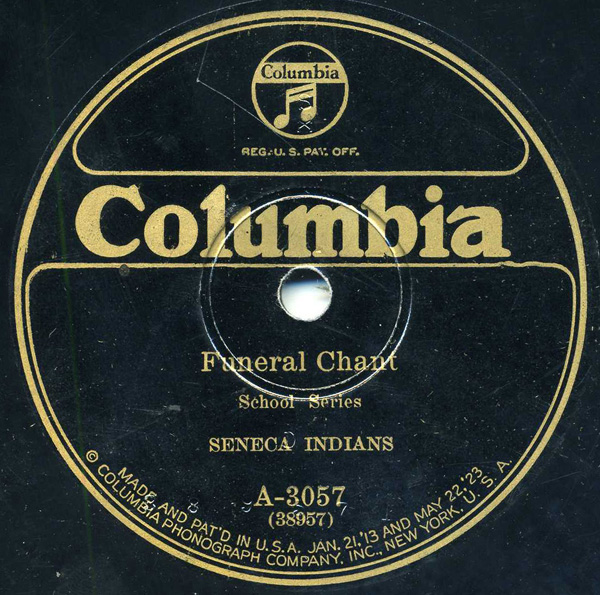 These two tracks of authentic music by Seneca American Indians were recorded 95 years ago, on July 23rd, 1913. Columbia must have kept it in the catalog for some time, as my copy is a pressing from the mid-1920s for their “Children’s Series,” which must have been a 1920s marketing tool for Columbia to regenerate interest in some of their older titles under a new umbrella. “Funeral Chant” is sung unaccompanied, while the “Children’s Chorus” is accompanied by tom-tom. The Seneca recorded another track that day, though it was never released. All we know is the title, scribbled down by an engineer in a Columbia ledger: “Farewell to Minne-ha-ha.”

Documentation indicates that this track was recorded in New York. Was it recorded in New York City proper? It looks like it. I scoured New York City papers from that time period and there was no definitive mention of Seneca Indians in town for an event in the summer of ‘13. However, in May of 1913, there was an announcement in the New York Times of a production of “Hiawatha” performed from June 9 to July 5th of that year by the “Indian Players from the Government reservation on Lake Erie” on a theatre on an estate in the Bronx, with the whole event being sponsored by the Women’s Municipal League. The “government reservation” referred to in the article is almost certainly Cattaraugus, a Seneca reservation on the lake established in 1784 - and most probably these are the same Seneca Indians who made this recording.

I will be away for the next three weekends, detoxing from the city and hopefully spending most of my time in a contemplative state. However, Excavated Shellac will continue on schedule! So, keep checking back. We aim to please.