It's Just a Room by Philip Lynch 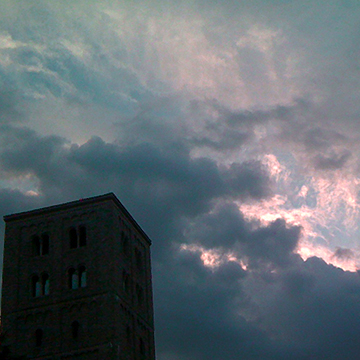 It's a crazy feature of modern American life (and yes, this statement could go anywhere there's so much crazy shit I could mention) that I have, on occasion, been kind of excited to find that I might be getting a cold. The pace, here in New York at least, is stupid. Part of my American brain registers that I run from task to obligation to recreation to task like an imbecile (without being able to convince the rest of the brain to do something about it), and for such a long time, that the only release from the grind is to be taken out of the game, benched, by Coach Mother Nature.

And then of course when I do catch cold I remember just how much it sucks and then curse myself for having invited it in. Actually, this cycle has repeated enough that, by the age of 38, I've smartened up to the scam. Now I know that if I feel that cold coming on, and I feel good about it, it's time to slow down and get in touch with that smart section of my brain that's been waiting all this time to say "I told you so."

The last time that I had non-cold time to kill was in the break between Christmas and New Year's. I still had some vacation left at my job for some reason, and I realized the stage was perfectly set for an escape from the most boring workweek of the year. Incidentally, it's my wife's busiest time of the year, so I was going to have a lot of time to myself. Naturally, I planned to get tons of stuff done. Record this-and-that-project-that-I've-been-meaning-to-do-forever, tidy up the website, organize the studio, maybe even go to a museum or some other human-like activity. Very little of that happened though.

What I did get was a sort of flushing out of all the chatter that had built up in my noodle for god knows how long: in the absence of the centrifugal force created by my absurd get-it-done gyrations there was nothing to hold all that junk up there. The orbits wobbled, and stretched, and then the flinty little nonsense particles spun out of the system into cold space.

And then I was left with... a blank wall. A crack in the ceiling. The stars, and snow, and a coffee cup on its back.

This back-to-real-space world is the one I'm hearing about in Philip's "It's Just a Room". Now I don't know if that's what he intentionally wrote in there -- even as a "producer" of the track I wouldn't dream of prying into the background story -- I just prefer to have my own relationship with the song. And what I find in this one is a very visceral description of the experience of just being somewhere, and the wonder of it.

I should perhaps point out that this website itself makes for some of that nutty pace I was lamenting up there a few paragraphs ago. But it's not an endeavor I could do without right now. I've got to promote Philip's songs, and my own pieces, and the pieces by the other artists I post on the site. When you listen to as much music as I do -- and believe me, I am an obsessive listener -- you know when you've got something special. It feels right to celebrate good work; you pay your respects. You nap later.

It's Just a Room by Philip Lynch is licensed under a Attribution-NonCommercial-ShareAlike 3.0 International License.