You came this way: Home > Nikki Sudden > Live at WFMU on Mike's Sh… > Happiness Lies Behind Your Closed Door... (Live at…


Happiness Lies Behind Your Closed Door... (Live at WFMU 2006) by Nikki Sudden 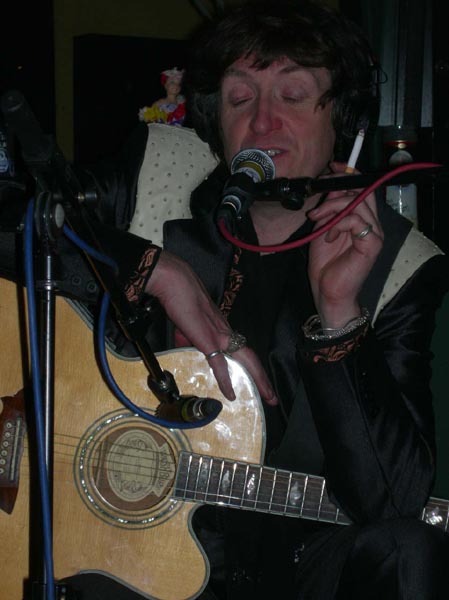 Nikki Sudden, founding member of pre-punk greats the Swell Maps, Dylanesque duo the Jacobites, and solo artist extraordinaire passed away less than one week after performing live on my radio show.

A week ago at this time, I was plenty nervous about meeting Nikki after so many years of being a fan of his music and live performances. When he showed up at the station, I was immediately taken aback by his disarmingly friendly demeanor, the incredible performance he wheeled out, and the amused patience he exhibited while dealing with me in my moment of total fanboy dorkiness. For a guy who could easily get away with pulling a pretentious, rock-god entitlement trip, I'm proud to report that Nikki Sudden was nothing if not a sweetheart, a gentleman, and a true class act. He is sure to be missed.

Anyone who'd seen Nikki perform in recent years was rewarded with an intimate engagement that felt more like catching up with an old friend than a mere rock show. Truth be told, he'd rarely get a great turnout in NYC and I think he'd be the first one to admit it. But he also made it abundantly clear that he had too much style to be phased by small crowds or being stuck on lousy bills with far lesser acts. He'd always mingle with everyone beforehand, share cigarettes with friends outside the club, and exhibit the kind of genuine excitement that's rarely seen in newcomers, let alone those who've played a strong hand in sculpting the underground rock world (and who never aspired to leave it behind for something more professionally validating.) Nikki Sudden made it clear that he was in love with what he was doing as much now as he was when the Swell Maps exploded out of the gates in 1972. The above photo was taken by my friend Rob Watts during Nikki's live set on my show last Monday evening. You are hereby invited to latch on to another piece of what made him so special.

Happiness Lies Behind Your Closed Door... (Live at WFMU 2006) by Nikki Sudden is licensed under a FMA-Limited: Download Only License.