You came this way: Home > FantomojdeDiskono > My Family > My Uncle, His Donkey And … > Sunset At XI


Sunset At XI by My Family 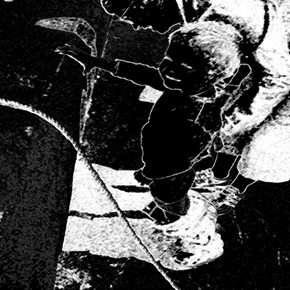 Herin: the FantomojdeDiskono archive unreleased, half released, muted, hastily put down secret recordings and unfinished fragments that were generated, bounced around and received during the active life of Diskono as a collective (1998-2002).

Info: Compiled in 2002 by Dimitris Kariofilis aka Ilios. Unreleased project, intended for release in what Diskono intended to be a monthly series (titled ‘Penthouse Hotplate’) of 3"CD "experiments in the format".

Details: My Family was a project related to the people around Greek publishing platform/label for sound media Antifrost and the person running it Dimitris Kariofilis aka Ilios (but was not in fact work by himself). Recorded in Spain and Italy from 1997 to 2001.

Diskono had a long corresponse with Ilios and first met him in Barcelona in October 2001. He contributed a track to the 2001 Diskono vinyl release 'Unattainable Text #1' LP.

Sunset At XI by My Family is licensed under a Attribution-NonCommercial-ShareAlike 3.0 International License.