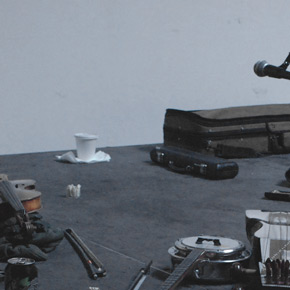 Music Factory was one of the largest collaborations between creative improvisers ever. Starting at noon on December 8th, 2012, an ensemble composed of more than 50 musicians came together to fashion an unbroken collective statement over 83 hours. The ensemble was an orchestra of free agents, bound not by the authority of a composer or conductor, but only by a willingness to trust one another, and take risks. The music they made was as much the sound of cooperation as the result, and the menagerie of social dynamics usually experienced on a subliminal level became the unifying thread of the concert.

In a world transformed by the internet and the resultant collapse of the record industry, live music is largely confined to the same sandbox as ever: 45 minute sets at small venues and festivals. Music Factory interrogated the mode of musical production, looking for conditions that might serve the promise of improvised music in the 21st century. It was an experiment in continuous musical production at a single site: can creative music sustain the sort of working environment familiar to other industrial sectors? It performed this experiment for the emerging global audience of the internet: the performance was broadcast live at newlanguages.org. The performance is now available in a faceted online interface, an LP for the internet era.

Music Factory was proposed in May 2012 by Alan Sondheim, a prolific multidisciplinary artist whose music first appeared on ESPdisk in 1968 at the head of an improvising collective out of Providence. It was brought to fruition by Christopher Diasparra, a freelance musician and music label consultant. The project was rounded out by the curatorial work of Edward Schneider, organizer of the Holidays for the Future concert series at Sixteen Beaver, and Ty Cumbie, organizer of the Free Zone and Living Lab series.

Music Factory 86 by Music Factory is licensed under a Creative Commons Attribution-NonCommercial-NoDerivatives 4.0 License.