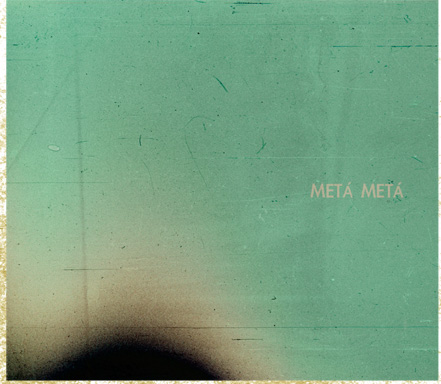 The first album by Metá-Metá achieves two remarkable things; it manages to sound unbelievably fresh as well as sounding as if it could have come from Brazilian music’s hey-day of the 1960s.

Metá-Metá is essentially three musicians, Juçara Marçal on lead vocals, Kiko Dinucci on guitar and backing vocals, and Thiago França on sax and flute. Throughout this debut album I had the feeling I was listening to a long-lost Afro-Sambas tape, which I mean as the greatest tribute. This is guitar work as accomplished as Baden Powell, vocals from Marçal that are equal to greats such as the Maria Bethania and Maria Creuza. And while it will take me a while to decipher whether the lyrics are as strong as those of Vinicius de Moraes, this overall is an album that has that same environment that bestowed those ground-breaking Afro-Samba albums of the 60s.

Kiko Dinucci has been improving as a samba guitarist over the years, as well as becoming more and more embroiled in the world of candomblé, an Afro-Brazilian religion with a strong dance and musical element. In Juçara Marçal he has partnered with a singer who is just as passionate as the religion. The added atmospherics applied by Thiago França add another dimension to this music but it is the voice of Marçal and Dinucci’s dextrous, direct guitar-playing which steal the show.

The opening track “Vale do Jucá” and “Vias de Fato” are the two tracks that most readily resemble the works of Vinicius de Moraes and Baden Powell on the original Afro-Sambas, both strong samba songs with the eerie atmosphere that seemed to imbue many of those original songs. As a contrast “Umbigada” is a sunny melody that sings straght to the heart with a great telepathy between the guitar and flute that intertwine on the way to making the gorgeous melody.

Interestingly the repeated refrain and whispered vocals of “Papel Sulfite” bring to mind Juana Molina, an artist coming from a very different background. Other songs that push Metá-Metá in new directions are “Oranian”, a full band effort which occasionally erupts into a cacophony of drums and sax with Marçal’s singing almost rap-like in it’s directness and flow; and “Obá Iná” which starts with a guitar line which could easily have come from one of the punk bands that Dinucci was in in his early days. This track and the following “Obatalá” are two where there seems to be more of a jazz connection with cymbals crashing, França playing a bigger role on sax and there generally being a sense of free-form construction.

Metá-Metá is truly an extraordinary record, one with a strong candomblé heart – the gods Oxum, Xangô and Obatala feature heavily on these songs – but that also works as a great samba and jazz record. Kiko Dinucci and Juçara Marçal originally worked together on the 2009 album Padê, which was under their two names. That record had it’s moments, but it’s here as Metá-Metá with the presence of Thiago França that they have really managed to find their feet and produce something timeless which will surely be revered for some time, as well as vying with Criolo for the best album of 2011. (via Spirits & Spices)

kikodinucci.com.br
So far 0 comments about this album. Add your 10 cents!