You came this way: Home > Mary Lattimore > Live at WFMU for Surface … > For Scott Kelly, Returned to Earth


For Scott Kelly, Returned to Earth by Mary Lattimore 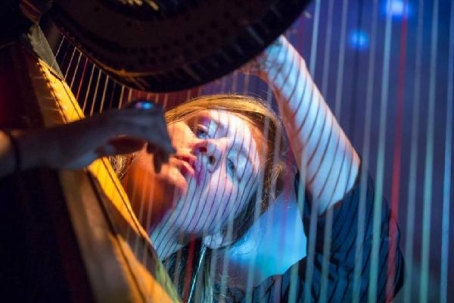 Mary Lattimore is a harpist from Philadelphia whose evocative compositions for solo harp have made her a unique presence on the music scene. In addition to her solo work, she has collaborated with artists as diverse as Meg Baird, Thurston Moore, Jarvis Cocker, Kurt Vile, and Fursaxa. 2016 has been a busy year for Mary. She released three records: one solo (At the Dam), one with Jeff Ziegler (Music Inspired by Philippe Garrel’s Le Révélateur) and one with Maxwell August Croy (Terelan Canyon). She has also toured extensively.

One of her tour dates this year was at WFMU’s own Monty Hall, where this set was recorded during her October 7th appearance. Mary played a Lyon and Healy Concert Grand harp used in conjunction with an electronic effects unit. The complete set of four pieces was subsequently broadcast on Surface Noise with Joe McGasko on November 7th. You can also hear Mary performing with Fursaxa on the FMA here.

To listen to the full show, please visit: http://www.wfmu.org/playlists/shows/69389

For Scott Kelly, Returned to Earth by Mary Lattimore is licensed under a Creative Commons Attribution-NonCommercial-NoDerivatives 4.0 License.