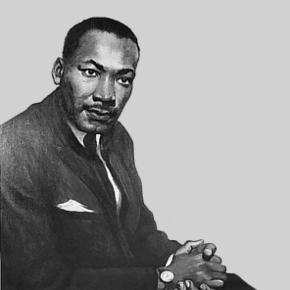 These are speeches by American civil rights activist Rev. Dr. Martin Luther King. The first is King's infamous "I Have a Dream" speech delivered on the steps of the Lincoln Memorial in Washington, D.C. on August 28, 1963.

The second is a speech given January 14, 1968, at a demonstration supporting anti-war activitists, including singer Joan Baez, imprisoned at the Santa Rita Prison in California. The recording of Dr. King's speech was produced by Colin Edwards for KPFA radio the day after the demonstration. (BB1460 Pacifica Radio Archives, CC by-nc-sa)

The third of King's speeches presented here is from March 16, 1968 at the event "Men and women in the arts concerned with Vietnam" in Los Angeles, California. The speech is prefaced by a six-minute introduction by novelist, playwright, and poet James Baldwin. The recording was made in the audience and aired on KPFK on April 4, 1968. (BB4661 Pacifica Radio Archives, CC by-nc-sa)