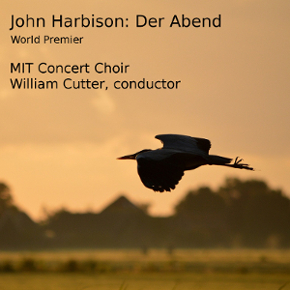 "Der Abend (Evening) is a short work on a poem by Joseph von Eichendorff, for double choir, paying homage simultaneously to the homophonic simplicity of Schubert, the antiphonal style of the 17th century Venetians, and the bitonality of Ives. That is quite a mix! Beginning and ending both in C Major and G Minor, and seeming to traverse almost every other key in between, the effect, while appearing somewhat incongruous or jarring at first, soon transports us into a dreamlike state where, as the poem states, we begin to notice that, 'ancient days and gentle sorrows now fuse like quiet showers luminously through the heart.'"— Harold Rosenbaum on the choral music of John Harbison

World Premiere of John Harbison's "Der Abend" ("The Evening") by the MIT Concert Choir under conductor William Cutter, 4 May 2001

This recording is licensed under a Creative Commons Attribution-Noncommercial 3.0 United States License.

Der Abend (The Evening) [World Premiere] by MIT Concert Choir is licensed under a Attribution-NonCommercial License.