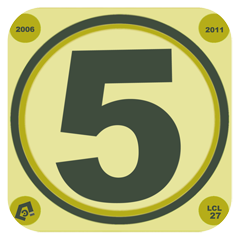 " This EP celebrates the 5 years of LCL.
5 years, 31 releases, and hundreds of thousands of downloads later, we keep the same aim : spread and connect !
The tale of LCL continues within the next chapters. Read hereafter what the instigators of this release have to narrate..."
LCL - may 2011

" Working with Ebsa is like listening to his flow, it comes natural. There are no artifices, his style and his own identity merge together - the need of spreading a message that unifies rather than dividing.
Producing the music for “Free as air” has been equally intense and natural, where dub style had to support rap lyrics in a functional way and therefore maintain a certain level of symmetry, seeking to reveal the contrast between controlled sound power in slow motion and fast flickering, sharp lyrics.
The choice by LCL to do a release for its fifth anniversary with Free as air is source of great pride ! Through the remixes it obtains the final form it should have : an intertwining track that is a sign of mutual friendship and respect between us."
mildtape - may 2011

" When mildtape and I decided to make a song together and once he sent me the instrumental track, I wrote the lyrics for Free as Air within an hour. They came to me very easily and it felt natural.
Influences for the lyrics include: the human world, people, my life, the project itself, soundcloud.com and the LCL label.
The lyrics cover many universal themes: communication & internet, history & future, technology & nature, lyrics & music, sound system culture and the synergy that can be achieved when people “team up”.
Mainly written in the English language, I also used Italian and French phrases in the lyrics. This was to emphasise the notion that - though we are all from different countries, have different cultures and use different languages - all humanity is connected through music."
Ebsa - may 2011

" The 'International Dub Cloud' remix of mildtape & Ebsa's "Free as Air" is a statement about a fresh way of thinking, making & distributing art in the information era, just like the original track is a statement aout freedom.
Taking a heavy deep dub structure such as mildtape's and reworking it to a light-hearted electrolatino tune (wich includes the mandatory guiros, percussions and brass) is not an extravagant exercise anymore. It's normal now ! The fact that it took 3 artists from 3 different countries is just a demonstration of the way the International Dub Cloud operates : through the air, free and with no middleman operators in between. "
Lata - may 2011

Free As Air [Lata´s International Dub Cloud Remix] by Lata is licensed under a Attribution-NonCommercial-NoDerivatives (aka Music Sharing) 3.0 International License.