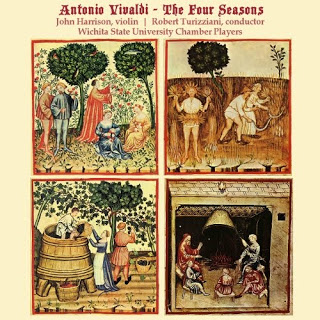 The Four Seasons (Italian: Le quattro stagioni) is a set of four violin concertos by Antonio Vivaldi. Composed in 1723, The Four Seasons is Vivaldi's best-known work, and is among the most popular pieces of Baroque music. The texture of each concerto is varied, each resembling its respective season. For example, "Winter" is peppered with silvery pizzicato notes from the high strings, calling to mind icy rain, whereas "Summer" evokes a thunderstorm in its final movement, which is why the movement is often dubbed "Storm."

The concertos were first published in 1725 as part of a set of twelve concerti, Vivaldi's Op. 8, entitled Il cimento dell'armonia e dell'inventione (The Contest between Harmony and Invention). The first four concertos were designated Le quattro stagioni, each being named after a season. Each one is in three movements, with a slow movement between two faster ones. At the time of writing The Four Seasons, the modern solo form of the concerto had not yet been defined (typically a solo instrument and accompanying orchestra). Vivaldi's original arrangement for solo violin with string quartet and basso continuo helped to define the form.

Autumn Mvt 3 Allegro by John Harrison with the Wichita State University Chamber Players is licensed under a Attribution-ShareAlike 3.0 International License.