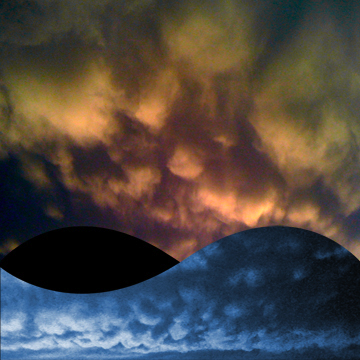 I've been waking up with songs in my head. It's not immediate -- I get a few moments of quiet -- but when I get to the kitchen and start the coffee they pop up like dolphins. This morning it was "Pump It Up" by Elvis Costello -- no surprise there, since that's what I was listening to last night. But some of them are more mysterious. There are recurring songs: in the past two months I've awoken with Roxy Music's "Mother of Pearl" in mid-verse with bizarre regularity. And then there's the totally random tune, like the other day when I found Kenny Rodgers' "(You Picked a Fine Time to Leave Me) Lucille" waltzing through my mental sawdust and peanut shells.

I don't mind it too much. It usually doesn't last but for a few minutes, and I'm used to having songs play in my head anyway. Plus, there's a perk, because the same neurons that so cheerily play these odd hits seem to do some of my writing work for me too.

I discovered the beneficial phenomenon last year. This may apply to other disciplines; I don't know. But pay attention -- if you can, peripherally -- to what happens in the first moments when you start working. I noticed that the first thing I automatically play is sometimes a shy idea that's trying to assert itself when I'm not looking.

That's what happened with this tune, "Pacifico". One afternoon I picked up the guitar to practice, and the first thing I played was the opening figure. It was half-familiar: I had been playing the same little gesture, I realized, for the past week. It's the kind of figure that I tend to ignore, because it's very simple, maybe too easy. But for some reason I noticed it, and took it seriously. And within a half hour or so I had written "Pacifico". Roughly. Over the next week or two I refined it, changed some notes here and there. But all the parts and the basic structure were right there at the start.

"Pacifico" is a classical-ish piece like last week's "Stellar Rushes". And though I wrote a lot about Steve Howe's "Mood for a Day" in those notes, "Stellar Rushes" doesn't share any musical characteristics with "Mood", whereas "Pacifico" paraphrases (I realized later) a little passage from Howe's piece. It was unintentional, and I'm pleased to say that my unconscious managed to hang it in such a way, between two posts dissimilar from anything else in Howe's piece, that it's a somewhat veiled homage. But there, I've spoiled it now.

Pacifico was my grandfather on my mother's side. I had dedicated my first album to my paternal grandfather, Zephir, and wanted to honor Pacifico as well. Something about this piece made me think of him, and so it got its name.

He passed away when I was four, but I remember him, and I learned more as I got older. He was a big guy with a matching voice, tough and a hard worker. He was level-headed. He loved his family, and especially his grandchildren, powerfully. When he was in the late stages of the lung cancer that killed him, he was still out in the yard up on a ladder with my father, building an awning so that I would have a place to play without getting sunburned.
-- James Beaudreau