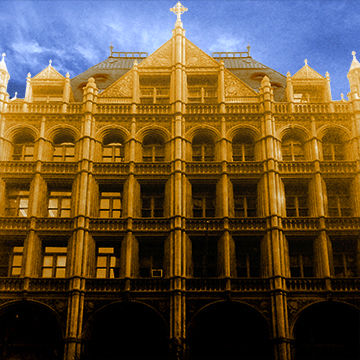 The fact that astrology nevertheless yields valid results proves that it is not the apparent positions of the stars which work, but rather the times which are measured or determined by arbitrarily named stellar positions. Time thus proves to be a stream of energy filled with qualities and not, as our philosophy would have it, an abstract concept or precondition of knowledge. - C.G. Jung, from Synchronicity and the Parannormal, Roderick Main, ed.

I realized after I finished my third album, Astral Law, that the second, Fresh Twigs, was the most experimental of the three I had made. There isn't really anything like "Gold Coast" on Java St. Bagatelles, or Astral Law, or even on the rest of Fresh Twigs -- but then Fresh Twigs is an album of one-offs.

When I say "experimental" I'm not talking about the genre -- I mean that it really was an experiment, undertaken with an unforeseeable outcome. And though the experiment that interests me the most in "Gold Coast" has to do with time, at least three other qualities of the track were experiments too. It's probably best to leave those qualities unnamed. It'd be a bad idea to discuss the nature of the source recording that I used, too. Unfortunately this makes for a short and obtuse sleeve note, but at least it doesn't tamper with the spirit of the piece.

The difficulty with the word "experimental" is that it's got a chilly feel to it. Lab coats and florescent light and steel tables. Better to say that "Gold Coast" was made by an intuitive process -- but let's face it, nobody's going to take you seriously if you say something as home-grown as that.

I have the most fun when I feel like my two minds -- the rational, organized and diplomatic one -- and the the other -- creative and elemental -- put aside their differences or duke it out (whatever it takes) and make something together. Music is one activity both can regularly agree on -- and finally, after a lot of years, each knows the value of the other.

So yes, "Gold Coast" was an experiment, but the result was a romance. I hope that's how it comes across. - James Beaudreau