March of the Teenagers pt. 2 by I Was A Teenage Strangler Soundtrack 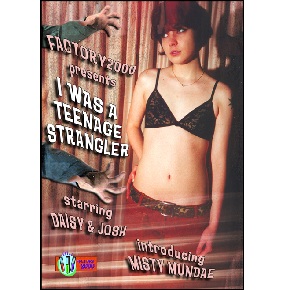 I WAS A TEENAGE STRANGLER SOUNDTRACK

Softcore princess Misty Mundae (Chantal, The Rage) in her first film role ever! A swingin’ party where ghastly teens indulge in liquor, mind-altering substances and acts of lewdness, defilement and promiscuity...A sexually depraved lunatic on the prowl, bent on wringing the life from these helpless youth...A night of bizarre and unspeakable atrocities that will have you, too, in the GRIP OF TERROR!

"I Was a Teenage Strangler is the uncut, unedited freak show behind the freak show, if you catch my drift. It's a virtual non-narrative trip down dirt bag alley, full of wretched behavior meant to terrorize (in Hellfire's words) the trench coat contingent.

It is awful on many levels, but so circumspectly awful that it really is a towering, anomalistic achievement in transgressive cinema, the likes of which has essentially been destroyed by 5-minute-long mpegs for cowardly pervs created by and trolling the 'Net. But the Factory 2000 kids meant well, in their own horrific way. Movie fans with special collections of the forbidden will enjoy it"

For the Factory 2000 production of 'I Was A Teenage Strangler'

March of the Teenagers pt. 2 by I Was A Teenage Strangler Soundtrack is licensed under a Attribution-NonCommercial-NoDerivatives (aka Music Sharing) 3.0 International License.
For more permissions:
contact artist