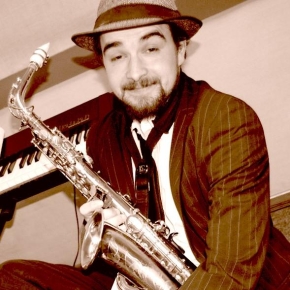 Here we have hard bop from Lorraine, France. Hugo "Droopy" Contini is part of the RawBounce Records collective and the alto sax man for The Real Dealers.

Once after rehearsal, the band had the space for a few more hours, so they recorded these tracks. Bassist Slikk Tim describes the session this way:

"Hey man, you're gonna record your first album in 4 days."  That's what I told Droopy Contini one Monday evening while sipping some beer after rehearsal.

From the get-go Droopy included 2 Charlie Parker favorites, a Clifford Brown blues he knew Pov Weyer loved, then he thought of doing The Beat Goes On and he composed a modal tune for this particular album.

The musicians for the rhythm section, namely Pov Weyer on piano, Ed Mars on drums and myself on bass didn't know what Droopy would actually come up with on Friday April 11th 2008.

The recording was done right after a Real Dealers rehearsal so there was few time left, something like 2-3 hours. We did one or two version of each track and then recorded it, with maybe one or two retakes for all the album.

This forced us to rely almost only on our feeling because nothing was rehearsed at all, so we tried to make it sound good at once, without getting to fancier arrangements, and it was a really cool experience.

Usually when you record something you're prone to polish the smallest details and make everything cleaner than clean, sometimes to a point were it just kills the music (especially if it's Hardbop Jazz.)

We were more like: "Okay, let's just play, no time to chit chat, and if it's bad, we'll just scrap the tapes."

I'm happy I didn't have to scrap the tapes.

Beat Goes On by Hugo 'Droopy' Contini is licensed under a Attribution-NonCommercial-ShareAlike 3.0 International License.