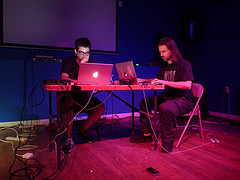 On Friday The 13th (in July 2012) Hell Hoarse did a very special gig at the Red Room.   Brendan returned to utilizing the computer as an instrument and the night of wonders unfolded once the sounds started to eminate from the speakers.

The recording was engineered by Jeff Carey.  A big thanks to him, the Red Room, and to Ayako Kataoka, Shana Palmer, Ami Dang, Liz Meredith Quartet who opened the night with the debut of their group!