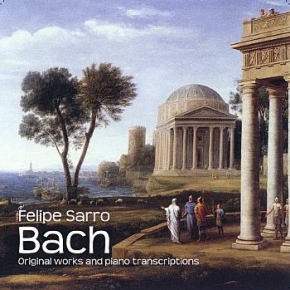 There are over 1,000 known compositions by Johann Sebastian Bach (1685-1750). The Bach-Werke-Verzeichnis (Bach Works Catalogue) is a numbering system identifying his compositions. The prefix BWV, followed by the work's number is the shorthand identification for Bach's compositions. The works in the BWV are grouped thematically, not chronologically.

Sarro begins the CD with one of the six suites written for the clavier (harpsichord or clavichord) between 1722 and 1725 known as "The French Suites." There is no surviving "definitive" manuscript of these suites.

The suite is followed by the Sinfonia No. 11 in G minor. It is part of the "Inventions and Sinfonias," a collection of 30 short keyboard compositions composed between 1685 and 1750, consisting of fifteen inventions (two-part contrapuntal  pieces) and fifteen sinfonias (three-part contrapuntal pieces). They were originally written by Bach as exercises for the musical education of his students. He named the collection:

"Honest method, by which the amateurs of the keyboard – especially, however, those desirous of learning – are shown a clear way not only (1) to learn to play cleanly in two parts, but also, after further progress, (2) to handle three obligate parts correctly and well; and along with this not only to obtain good inventions (ideas) but to develop the same well; above all, however, to achieve a cantabile style in playing and at the same time acquire a strong foretaste of composition."

The final original arrangement by Bach performed by Sarro is the Prelude No. 8 from the "Well-Tempered Clavier, Book 1: Prelude and Fugue No. 8 in E-Flat minor." Generally regarded as one of the most influential works in the history of Western classical music, "The Well-Tempered Clavier (Das Wohltemperirte Clavier)" is a collection of solo keyboard musicBach composed "for the profit and use of musical youth desirous of learning, and especially for the pastime of those already skilled in this study."

The remaining nine pieces Sarro performs on this release are Bach works transcribed and arranged for piano by Alexander Ilyich Siloti (1863-1945). Siloti wrote over 200 piano arrangements and transcriptions, and orchestral editions of Bach, Beethoven, Liszt, Tchaikovsky and Vivaldi. His most most famous transcription is his reworking of Bach's Prelude in B minor (BWV 855a) which Sarro performs here.

Sarro begins with the Sinfonia from Cantata BWV 29, "Wir danken dir, Gott, wir danken dir," which was written for the occasion of the election of a new town council in Leipzig and first performed on August 27, 1731.

This is followed with the Andante from "Violin Sonata No. 2 in A minor (BWV 1003)". The "Sonatas and Partitas for Solo Violin" from which this is taken was largely ignored until the celebrated violinist Josef Joachim started performing the works. Today, they are an essential part of the violin repertoire, frequently performed and recorded.

Next is another of Siloti's transcriptions from the "Sonatas and Partitas for Solo Violin," the final movement of the "Partita No. 2 in D minor (BWV 1004)" written during the period 1717–1723 and some scholars suggest it was written in memory of Bach's first wife, Maria Barbara Bach.

Sarro's next piece is Bach's Prelude (BWV 555) from "Prelude and Fugue in E minor: Eight Short Preludes and Fugues (BWV 553–560). Although traditionally attributed to Bach, these preludes and fugues are now believed to be works by Johann Tobias Krebs or Johann Caspar Ferdinand Fischer.

This is followed by Siciliano, the second movement from "Sonata in E-flat Major for Flute or Recorder and Harpsichord (BWV 1031)" which also has scholarly claims against its authenticity as a work by Bach.

Next is the Prelude from "Cello Suite No. 1 in G Major (BWV 1007)" from the "Suites for Solo Cello." The Prelude is probably the best known movement from the entire set of suites and is a frequent selection in film soundtracks.

The Fantasia of the "Fantasia and Fugue in C Minor (BWV 906) appears next, and is followed by the Air from "Orchestral Suite No. 3 in D Major (BWV 1068)" originally for oboes, trumpets, timpani, strings, and continuo. The Air is instantly recognizable by most, as is one of the most famous pieces of baroque music.

Sarro completes the release with another prelude from the "Well-Tempered Clavier," the Prelude from "Prelude and Fugue in E Minor (BWV 855a)," another recognizable Bach classic.