You came this way: Home > Feist 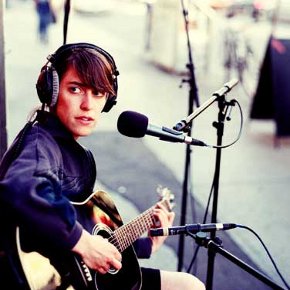 Here are the things you need to know about Feist in order to fall in love with
The Reminder: she’s much more than just the torch singer leaning against the
ballad with a lone spotlight on her. In a past life, she was a shouty battle of the
bands teen queen in a Calgary punk band. She’s made bashful indie boys
swoon with her brash riffs playing guitar with Toronto rock band By Divine
Right and her shout-out fronting of Canadian indie rock genre definers Broken
Social Scene. She’s stubborn and meticulous about things like the EQ level on
the stereo and her long honed guitar tone. She’s been placed in the role of the
most unlikely fashion icon, but mostly she’s a tomboy who doesn’t really do
make-up. She may be able to warble a bouncy foxtrot like Mushaboom that
your grandparents wish they could’ve cranked on their Victrola, but she also breathed life into surreal sock puppets alongside her electro-trash BFF Peaches in Berlin and beyond. The cult-favoured original, raw demos (the Red Demos) for Let It Die and The Reminder included the sound of streetcars rattling along city streets. Onstage she can pivot between being the solo singer captivating a room with her guitar or take on the role of leading a band of three brothers.

You can hear all of this on The Reminder, and in some ways it’s more Feist than anything she’s done before. That’s not to say that Let It Die was a lie; quite the contrary. But it was the sound of collaboration and exploration, cocooning in a strange land with one of her best friends (Chilly Gonzales, who returns to lend a hand on The Reminder) and stripping away layers for a musical experiment unlike anything she’d ever done.

Nobody, least of all Feist, anticipated the tremendous response listeners around the world would have to Let It Die. Awards were won. Her name appeared in Best Of The Year lists. Eager bandwagon-jumpers were turned away from festival showcases. All of a sudden, a girl who was barely an unknown secret outside of Canada had top 10 radio singles filtering through malls and grocery stores. Her response? To keep touring. Thirty-three months and three continents were covered. The Reminder was written and conceptualized on the way.

When the road was finally exhausted, it spat her out at La Frette. A 200-year-old manor house in the outskirts of Paris. Our girl corralled her live band – Julian Brown, Bryden Baird and Jesse Baird – and invited Gonzales, Mocky and Jamie Lidell to help harness the sound. They filled the dining room and parlour with a piano, vibrophones, organs, guitars, amps… shoved two drum kits against the stained glass windows and scattered microphones like mousetraps around wood-floored rooms. You can hear the dogs barking on the tracks recorded
live in between bites of their apples and walks in the garden. Like kids at a rock ’n’ roll summer camp, Feist and her talented comrades hung out in their pajamas making The Reminder. In love with being stationary for the first time in two and a half years, she woke up every morning and made snow angels in the feather-stuffed duvet on her great big bed. She shivered through several failed attempts to record the birds chirping outside on the old
stone patio, thwarted every time by the sounds of unexpected traffic (cars and airplanes) in the isolated area (later, a one-off effort outside a studio in Toronto’s Danforth neighbourhood succeeded in capturing Canadian birdsong for folk ballad The Park). And the songs came one after another, more than they had expected to finish in this short two-week window.
An album.

“Brandy Alexander” with it’s sucker-punch melody tumbling over a kick drum heartbeat. The jangly Dusty In Memphis teen dream paean, “1234.” With perennial collaborator Gonzales, she came up with “The Limit To Your Love,” an ominous slow-burner in which Feist becomes Nico over hard-soul piano chords and Mo Tucker percussion. Live fave “Sealion Woman,” the traditional chant famously covered by Nina Simone, got propelled into the stratosphere with cell phone sounding synths, handclaps and a backing mini-gospel choir. The shimmering, plaintive “The Water” immerses Feist’s stunning vocals in layers of vibraphone and piano, letting haunted allegorical lyrics about stoic mountains, a clumsy and dangerous sea and little bone piles slowly emerge from the depths.

“Intuition” unspools with fragile finger-picked guitar, Feist playing call and response with the distant chorus of a crowd. It’s hard not to be floored by the staggering breadth and depth of the material on The Reminder. You can hear
the sound of every facet of Feist– the punk kid from Calgary, the T.O. indie rock poster girl, the Parisian ex-pat who taps the cobblestone. The lost and the found – without the slightest bit of compromise. It’s Feist simply answering her own questions with questions, and giving in – as she sings so sweetly at the end of
The Reminder – to “how her heart behaves.” 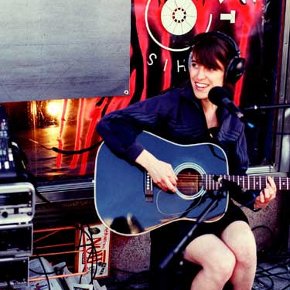