You came this way: Home > David Borden > The Continuing Story of C… > Part 9 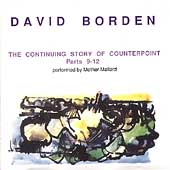 The Continuing Story Of Counterpoint is a remarkable 12 part musical cycle that Borden composed between 1976-87. Lasting 3 hours, Cuneiform has released this seminal work on 3 CDs, each containing 4 parts. The music is a pleasing and highly listenable mixture of classical forms, dense textures, strict counterpoint, and high energy electronics. AUDIO Magazine had this to say about the series: "When released in its entirety, this series may stand as the 'Goldberg Variations' of minimalism, a canon of work that defines a style and an era."

Part 9 by David Borden is licensed under a Attribution-Noncommercial-Share Alike 3.0 United States License.