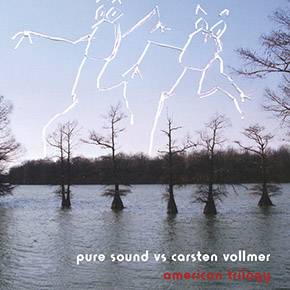 The roots of Pure Sound are in the 1980s British Post-Punk movement. They tell stories with words, field recording collages and instruments. Carsten Vollmer takes their recordings and cut them in pieces. The result is the pure sound of the noise of a radio transmission.

For this recording, PURE SOUND are:

PURE SOUND vs VOLLMER came about when Carsten Vollmer suggested we sample each other’s work and write new material from that. I knew how direct and uncompromising Carsten’s work was and thought the collaboration would highlight huge contrasts in the way artists approach each other’s work. I was curious to see what he might do with Pure Sound songs too – you couldn’t get much more different!

Working as Pure Sound I gather found sounds to build a soundtrack for lyrics, bass lines and piano melodies. When Carsten sent me his 7” singles this gave me a number of ideas of samples I might take. I work in Pro Tools so I selected some cuts but then had to go to America for work.

This collaboration features the Pure Sound AMERICAN TRILOGY, three tracks using found sounds gathered while main songwriter VINCE HUNT was in the United States in 2008 and made with samples taken from Carsten VOLLMER’s vinyl catalogue. Once finished the songs were sent to Carsten VOLLMER for his interpretation with his unique approach to music.

These are the sounds of New Orleans, Chicago, Vicksburg, Minneapolis and St Louis mixed up and fed into songs penned on the road by Hunt. They feature the sounds of boats on the Mississippi, the calliope steam whistle from paddle steamers in New Orleans; freight trains going through Hannibal, Missouri; the Chicago subway and the gravel under car wheels from the Stovall Plantation, where blues guitarist Muddy Waters grew up.

These three songs are observations on life, love and relationships; on what we do with our time on this earth.

Edge of the World

Everyone else has what they want, while my face is twisted against the bitter wind of disappointment
Destiny called me. Pulled on my vest and hat and climbed aboard that ship. I went to the edge of the world, and didn’t think about it.
At the edge of the world the cliffs are rocky and brown. The wind is strong. It’s a long way down.
I think of a friend who walked into the propellers of an aircraft. And the polar bear who, with nothing else for miles around, fell for the old rifle trap.
Dipping fingers in the Berents Sea
So cold I have to rub them to bring back any warmth
It’s like shaking hands with a frozen friend
Those same fingers hold your hand at 3am
I have no control over what’s in my life
My footprint in some faraway place. It doesn’t matter much if it’s forward or back.

Recordings of her Voice

Her Voice In My Head - Cut+Go=RMX - AN 16-T 2.2 by Carsten Vollmer is licensed under a Attribution-NonCommercial-NoDerivatives (aka Music Sharing) 3.0 International License.