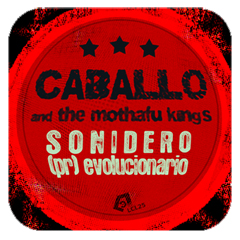 " This sampler from Caballo's upcoming LP "Sonidero Evolucionario" (july 2011) is an opened window on a world that left conventions and boredom far behind. Could it be flamenco, ragga, cumbia, dubstep or classical, no tags seems to be large enough to contain the energy that lies into his music. "
LCL - february 2011

" About Caballo upcoming album "Sonidero Evolucionario" : It is an extension of the sound developed by Caballo mainly as a producer, not so focused on his MC skills as Sonidero Revolucionario but more in Caballo's unique vision of Global Bass. As politically intense as the BPMs, Caballo isn't afraid to use music as a tool for social change, professing a clear anti-war, anti-globalization message in his lyrics primarily in Spanish. Deep, rumbling rhythms interlaced with socially conscious lyrics and a globally-inspired aesthetic make this album a must-hear for Global bass heads all over the world. "
Caballo - february 2011

Flame n Co by Caballo & the Mothafu Kings is licensed under a Attribution-NonCommercial-NoDerivatives (aka Music Sharing) 3.0 International License.