"Blind" Blake (circa 1893 - circa 1933) was an influential blues singer and guitarist. He is often called "The King Of Ragtime Guitar". Blind Blake recorded about 80 tracks for Paramount Records between 1926 and 1932. He was one of the most accomplished guitarists of his genre with a surprisingly diverse range of material. He is best known for his distinct guitar sound that was comparable in sound and style to a ragtime piano. 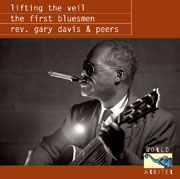