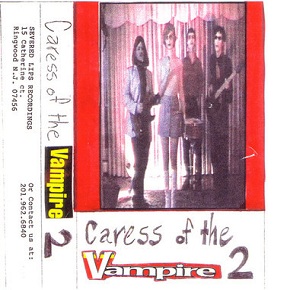 In 1996 the people of Severed Lips Recordings got the opportunity to create a feature film and soundtrack.  The title given us was Caress of the Vampire 2, the only requirement that it had nudity.

Being lovers of horror and exploitation cinema and having a special love for bad drive-in turkeys, we set out to mix Jess Franco, John Waters and Ed Wood Jr in a mod rock ‘n’ roll, Vampire, foot fetish, sleazoid shot on video affair.  Having no proper training in the art of movie making it was very surprising when it turned out to be entertaining enough to earn the VHS release a place on the Tower Video new release wall, get the cover of Scream Queen magazine and be re-released on DVD.

The film stared Severed Lips recordings alumni Ruby Honeycat, William hellfire, Matt Icklan and Mikey Ovum, who also wrote directed and scored the feature. The sound was a mix of Go-Go soul, raw “MC5-esk” rock and experimental noise. By those involved the soundtrack was consider one of the top compilations to be produced by Severed Lips.

A thieving hipster breaks into an seemingly abandoned home and is bitten by a lizard, dripping blood all over the dormant corpse of “Billy the Vampire” and out of work B-movie vampire who is also a real life vampire.  The thief is turned vampire guard of the house.  When a bunch of mean spirited kids come to call, wanting to use the house as a party pad and rape station for their unwilling girlfriends they meet the vampire duo and are put to death.

Meanwhile Dr. Acula, a Podiatrist cursed with an uncontrollable sexual attraction to women’s feet, assaults a female patient’s foot.  When she threatens to contact the authorities he strangles her with her own sock!  At home he sniffs a pair of actress ‘Mimsy Farmers’ shoes in hopes to forget his graduation from foot fondler to throat ringer.  Making matter worse a vampire with a flat tire shows up at his door wanting to use the phone.  Reading the troubled Acula’s thoughts Billy the Vampire offers to help realize his foot fondling dystopia as long as Acula sells his sole and becomes one of the undead.

Together they procure girls and turn them into Go-Go Ghouls via blood enemas, for the purpose of fondling their feet and watching them play footsies…when Acula’s practice suffers and the coven of ghouls find themselves low on funds, Billy contacts his agent Lon Straus; they start a band and record a hit song with one of the girl ghouls on lead vocals.  When the spotlight shines on Ruby the Ghoul instead of Billy the Vampire his jealously takes over and he kills the cash cow.  Acula enraged by Billy’s jealousy douses him with a helping of garlic powder and commits suicide.  Burying his partners in the back yard, Lon capitalizes on the ghoul girl spotlight and takes over the business.  Lon’s run of success is shortened when Acula and Billy return from the grave to exact revenge on the greedy Lon Straus.

14 The Dracula Died for Your Sins - Mono Ovum

Teenage Girl Ghoul A Go-Go (re-mix) by Armageddon Gospel Revival is licensed under a Attribution-NonCommercial-NoDerivatives (aka Music Sharing) 3.0 International License.