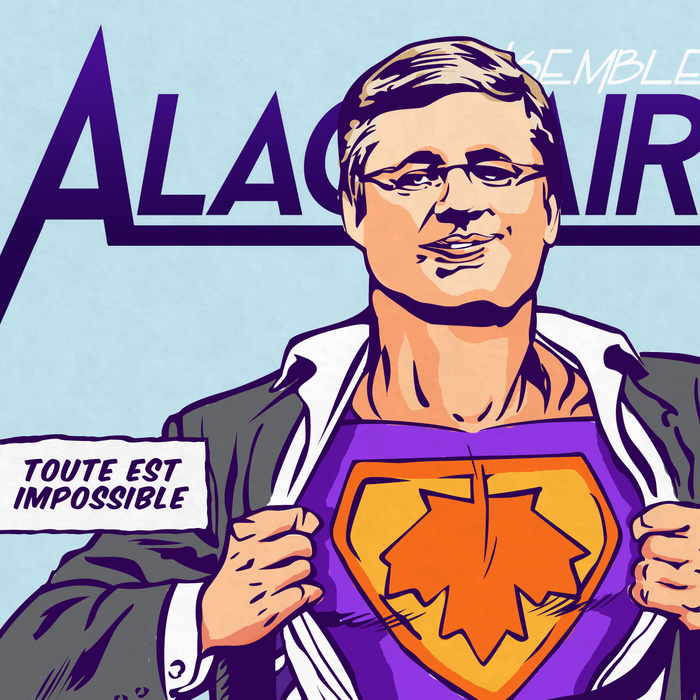 Bonne Fête du Canada! The latest album by Alaclair Ensemble is finally available as a free CC download. Toute Est Impossible was leaked earlier this year via Alaclair’s own version of the deep web. That deep web is just one extension of the ensemble’s parallel universe.

“Postrigodon” is what they call their musical style—a playful freeform mashup through the lens of hiphop. Alaclair’s members KenLo Craqnuques, Maybe Watson, Ogden, VLooper Eman and Claude Bégin are at the forefront of a very exciting hiphop scene in Quebec, but “Bas-Canada” is their true home. The album cover portrays Stephen Harper, Canada’s Prime Minister, who apparently becomes a superhero when he dons the group’s signature upside down maple leaf.

Alaclair’s last album was shortlisted for the Polaris Prize for excellence in Canadian music, and with Toute Est Impossible, they continue flipping that maple leaf upside down. They want you to “Logoff” the computer, referencing Facebook, Google on songs like “Logoff.” “Woof! mami / It's a bloggy blog world.” A couple tracks delve into R&B territories, like “Calinour” (Care Bears forever?) while “Licornes” paints an L.A. gangster funk vibe, referencing Sadé. Elsewhere, they shout out Kool Keith. I’d say Alaclair is somewhere on that spectrum, but really they are in their own world.

STM LIGNE MAUVE PART 1 by Alaclair Ensemble is licensed under a Attribution-ShareAlike License.
Permissions beyond the scope of this license may be available at http://alaclair.com/.