You came this way: Home > 1-Speed Bike > Pashto Translator Needed > Take The Red Out Of The Canadian Flag And You Get … 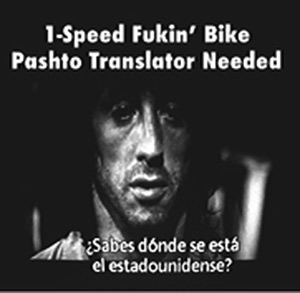 What is this war? They claim it’s to liberate woman and to fight drugs and terrorism but woman are worse off then under the Taliban and opium is triple and you can’t win a fight against a tactic. Anyways Osama Bin Laden used to work for them, like Manuel Noriega and Saddam Hussein, who will be next? Maybe its just to punish Afghanistan for being a mess because its been fucked over by other countries? So lets fuck them over too? People do fucked up things in Afghanistan, they hate woman and aren’t tolerant of other religions. We hate woman and anyone who isn’t christian so let’s bomb ourselves? Why do we only hear about Canadian soldiers dying? Why doesn’t the CBC report on how many Afghanis we kill every day? Do we ever kill any? Are we not very good soldiers? Does killing people get in the way of trying to save them? We don’t give a fuck about Afghanistan or Somalia or Haiti or Yemen or Ethiopia or Colombia or any Native Reserve in this country, of course not, no one in charge of this country cares about anything except making money and keeping power. And most people not in charge don’t care about anything beyond getting laid, making money, buying stupid shit they don’t need and pulling weird power trips on those closest to them. So fuck you too. Oh by the way, fuck your yellow ribbons, it’s a volunteer army, you take your chances, those bumper stickers are just a distraction. But what the fuck is wrong with us? Why do we let this go unopposed? Why aren’t we out there in the small town high schools talking to kids, the ones that the Canadian Army is out there recruiting? Why aren’t we out on the streets and malls about this?

Take The Red Out Of The Canadian Flag And You Get Surrender (We Are Wolves Remix) by 1-Speed Bike is licensed under a Attribution-Noncommercial-Share Alike 3.0 United States License.