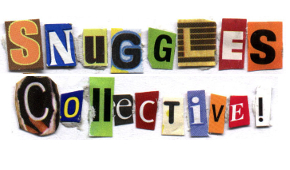 Snuggles started life in 1996 as a listserv (that's a mailing list), run by Brian MacDonald, where fans could discuss various Negativland releases, ask questions, report on live shows, clarify any misunderstandings on the whole U2 affair, find out what the Weatherman's favorite cable channels are, etc.

It was named after the dog in the Casey Casem dedication on the U2 album. A cute little inside joke for a small mailing list that only was interesting to fans of Negativland.

Then something weird and wonderful happened. The band was not really touring very much or producing many new albums, so the talk tended to wander. It focused on Over The Edge (see below) and the various ways that people could create content for the show to be piped in live every Thursday night. Soon the creation of weird sounds for their own sake became a topic of conversation. Then a compilation of Snuggles-participant tracks was traded around. Consequently, when digital sound manipulation tools and cd-burners became easily available, the Snuggles folks were primed and ready to pounce on them. Soon, strange distorted samples and off-kilter beats were being traded around as MP3s and the focus of the list was rarely on Negativland at all. Droplift (see below) featured over two dozen tracks by Snugglers and they paid for its pressing themselves. Then came Dictionareoke and Free Speech For Sale and the Snuggles Media Collective was off and running.

Come find out where it is going next. The most exciting part is that it is friendly, mature (usually), and willing to entertain any perspective. Disagreement is strong and willful and polite (usually). And we only yell when we don't mean it. Snuggles is now hosted by Pan of the Sensory Research Network. 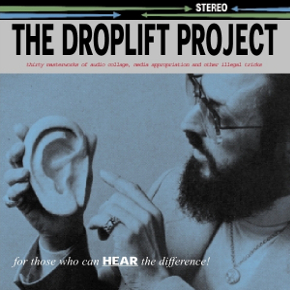